Our success is attributable to our ability to consistently meet customer needs and expectations with passion and experience across a range of disciplines from within and outside of the aviation industry.

Our Team makeup and background: 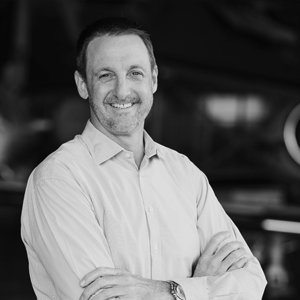 Absolute Aviation’s Founder and CEO’s experience in the aviation industry dates back to the late 80’s and includes a broad spectrum of aviation qualifications and experience. His unwavering focus has always been on serving the needs and expectations of customers first, and this has been the basis of all growth and development in the Group since inception.  His reputation in the industry is for providing a service offering that is educated, honest, and fair, and these values remain central elements of the Company ethos to this day.

After qualifying as an Aircraft Maintenance Engineer in 1990, and gaining experience and Licenses on Learjet 20, 30 and 55 series aircraft, Neil went on to complete his USA Airframe and Powerplant License in 1991.

In 2001, after ten years of service at ExecuJet, Neil started Howard Aviation, a Management Consulting Services business that primarily managed the maintenance of aircraft on behalf of owners. During this period, Neil completed his Fixed Wing Commercial Pilot’s License and later earned his Airline Transport Pilot’s License. Neil is rated on numerous corporate jets and multi-engine turboprop models, and went on in 2006 to qualify as a Helicopter pilot.

In 2003 Neil invested in a new venture which extended reach and facilities to Cape Town to complement operations in Johannesburg.  In September 2007, Neil changed the name Howard Aviation to Absolute Aviation to reflect the more business it had become.  The Company has enjoyed positive year-on-year growth ever since. 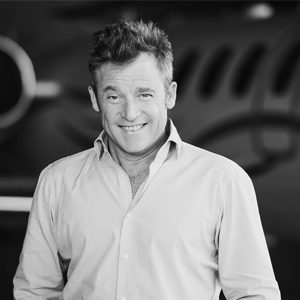 Born and educated in South Africa, Guy comes to aviation with an extensive local and international Marketing and Sales pedigree in FMCG. His working experience since 1990 includes various functional roles within two Global Fortune 500 businesses, Nestle and JTI. In late 2007 Guy was transferred to an international role based at JTI Head Office in Geneva, Switzerland to serve 120 markets in the capacity of Marketing Director across a portfolio of leading global brands. During the course of his time abroad, his global roles included:
• Marketing Director – South Africa (at time of leaving) 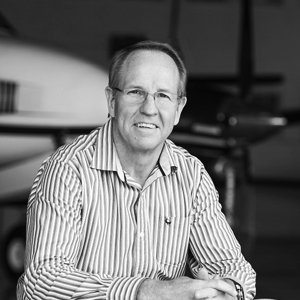 As Group Commercial Director for Absolute Aviation in Africa, Dewald Basson oversees all aspects of business transactions ranging from accounting, legal and business strategy. In this demanding role he uses his hands-on skills and years of industry experience to tackle a wide variety of issues, challenges and opportunities. In essence making sure the wheels keep turning.

Before being appointed for his current job, Dewald was Commercial Director for Absolute Aviation Service Centre from January 2016. His passion for aviation is equalled by his appreciation for the people with whom he interacts in the industry – from aircraft owners to business leaders and his fellow dynamic leadership team. Dewald believes the phenomenal growth history of Absolute Aviation is linked to the great brand portfolio and to the people in the organisation. ‘The combination of both make Absolute a very challenging competitor’, he says.

▪ Financial Manager for Ancom Aviation Ltd where he first encountered the aviation industry.

▪ Served as a director for CAASA (Commercial Aviation Association of South Africa) and also heading up BAASA (Business Aviation Association of South Africa) while working for Billiton Aviation. As the CAASA representative at IBAC, Dewald was a member of the IBAC working committee that produced the first internationally recognized aviation safety guidelines for private corporate operators.

▪ He joined Absolute Service Centre in 2016 stepped into the role as the Commercial Director for the Absolute Aviation Group in 2017. 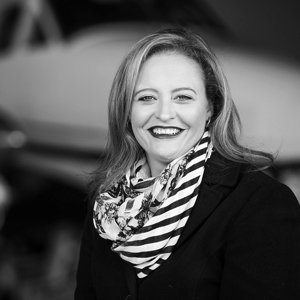 Jackie van der Westhuizen oversees Absolute Aviation Group’s finance function, ensuring accurate reporting and management of the Finance Team. She is a qualified Chartered Accountant (SA) with skills in group financial management, auditing, accounting and taxation. With more than 10 years’ experience in the financial industry, Jackie brings her problem-solving skills, ability to work under pressure and pursuit of excellence to her role as CFO.

During the completion of her she served her articles with Auditing Firm and was promoted – first as auditing/client relationship manager (2006) and later to audit partner (2012). It was her drive to expand her knowledge and gain experience in the corporate world that led her to Wholesale Housing Supplies in 2015 as the group financial manager.

Absolute Aviation welcomed Jackie to the family as Chief Financial Officer in March 2017. With her firm belief that finance is the backbone of any good organisation Jackie has provided valuable information to all the business partners, helping the company make informed business decisions. 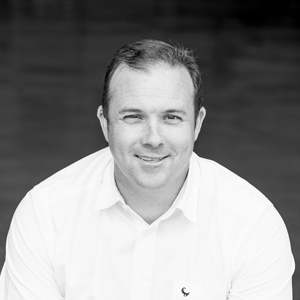 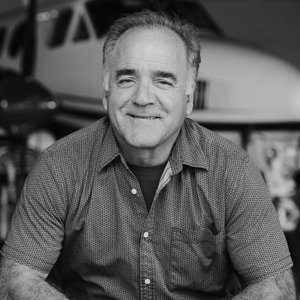 Elio De Oliveira provides technical quality assurance through technical support, capacity building and leadership to Absolute Aviation in his capacity as Technical Director for the Service Centre in Africa.

Elio has worked for the company for 28 years, bringing technical expertise and years of experience in the aviation industry to the group. He is known for his practical problem-solving approach and meticulous attention to detail when it comes to inspections, making sure all aircraft leave the Service Centre safely.

His journey to Absolute Aviation started in 1991 as part of his apprenticeship at Field Aviation, which led him to qualify three years later as an aircraft engineer. In 1997, he spread his wings and joined Comair.

Elio’s technical knowledge and qualifications are impressive, but he is particularly excited about the Cessna Citation product. Studying Flight Safety courses for Cessna Citation has been a top priority for Elio from 1991 until 2013. 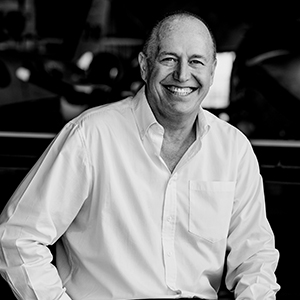 Bruce Johnstone began his aviation career at the age of twenty-two and has been in the industry ever since. He served as a pilot in the SAAF for ten years, flying a variety of aircraft as well as being actively involved in the then relatively new approach to aviation safety and safety management principles before leaving for the civilian sector.

Bruce obtained his commercial pilot’s license in the last few years of his air force career and moved on into contract pilot world, flying for a company called Rossair on behalf of organisations such as the International Red cross, World Food Programme and Medicins Sans Fontier. This lasted on eight months before he was moved into an office post first in operations ending up as Managing Director. Rossair became one of the largest “contract” companies in sub-Saharan Africa with bases in countries as far apart as Kenya, Ivory Coast and later on even Jordan and Pakistan.

From here he moved on to start his own company operating turbo-props throughout Africa on behalf of DHL. The company grew quickly on the back of the DHL work and he sold out to a group of investors a few years later. Bruce then started another aviation contracting company in 2006 flying mainly on behalf of humanitarian organisations.

Throughout his commercial career Bruce kept up his pilot’s license and returned to the cockpit for a variety of flying positions on aircraft such as Gulfstream II’s, III’s and the Challenger 600 series before deciding to take up a position in Sales with Absolute Aircraft Sales. His aviation pedigree and experience will be invaluable to the organisation in his new role. 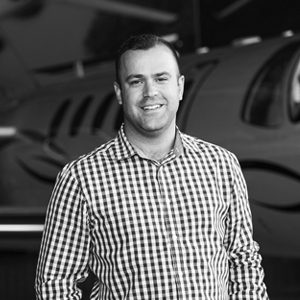 Rohan joined Absolute Aviation in 2013 but his passion for the aviation industry started long before that. He completed various training Programmes at Cranfield and Avia Global Training centres – leading aviation training organisations registered and accredited with the South African Civil Aviation Authority. He has years of professional experience in various leadership roles in the aviation industry and has worked for companies such as Extra Dimensions Aviation, Wings Charters and Aeronautic Solutions.

He joined Absolute Aviation’s Flight Services Department where he was Senior Manager of Operations and Business Development. He became the Responsible Person: Flight Operations (RPFO) in early 2016.

In 2017 Rohan was promoted to Group Commercial Director of Flight Services – Africa, where his responsibilities include oversight of all managed aircraft, charter and flight operations and responsibility for the Fixed Base operations of the Group. His Team is responsible for the implementation of all Civil Aviation Regulations and Technical standards. Another key responsibility of Rohan is to ensure a safe and reliable Air Service and ongoing compliance with AOC requirements.

Rohan has many notable achievements in the aviation industry which he became involved 2006. With eleven years of operations management experience, Rohan’s aviation proficiency includes: 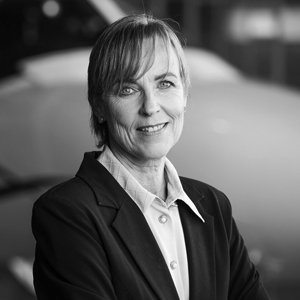 Sharlene Earle supports the aviation industry, community and Textron product (Cessna and Beechcraft) by making sure they have everything they need to get back in the air.

She does this in her role as Group Commercial Director Aircraft Parts: Africa by providing the right parts at the right price, excellent customer service and proposing new innovations with her focus on local and international market research.

Sharlene recognises and respects that Absolute Aviation has the strongest product in General Aviation by being the authorised representative of both Cessna and Beechcraft and that it requires her team’s greatest effort and commitment. She leads her team with forward-thinking ideas and her strengths lie in her meticulous attention to detail.

Sharlene contributes a vast amount of knowledge to Absolute Aviation Parts with years of experience in parts management, aircraft maintenance, all aspects of aircraft importation, financing and sales as well as managing South African and foreign Air Force supply contracts.

▪ From 1984 to 2000 Sharlene was Administration Director for various companies – Talisman Electronics, Alpha Page and Lima Sierra. In her role as Director at Lima Sierra, Sharlene was responsible for the Management of  the contracts with the South African Air Force for the importation and supply of Aviation parts and services for all the Cessna Citations, 185’s, Beechcraft King Airs, CAASA’s and Piper Aztecs, including service contracts, propeller and engine overhauls and exchanges.

▪ Financial Director for the Group of Companies (Piper Aircraft Distributors) from 2001 until 2013. In this position, Sharlene managed Middle East contracts for aircraft engines and propellers. She also acquired knowledge and experience in the entire Management, Administration, Importation, Contracts and Sales of new and pre-owned aircraft, aircraft parts, aircraft maintenance, human resources and branches.

▪ Joined Comair Spares in 2014 in Parts Sales and Administration.

▪ Commercial Director of Parts in Africa for Absolute Aviation in 2016. 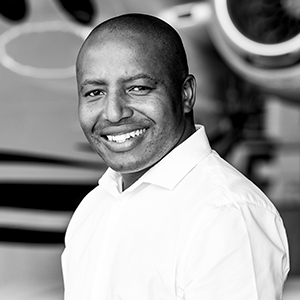 Timothy has a long and accomplished history in aviation dating back to his commencement at Execujet in 2003 in the capacity of an engine shop cleaner. His advancement through ranks and functions includes joining NAC in 2006 as a Counter Clerk in the Service Centre, to Parts Sales in 2007, to Parts Sales Manager in 2012. Timothy joined Absolute Aircraft Parts in 2017 to lead the Sales and Customer Service functions and in 2018 was promoted to the role of Sales Director for the Company. His experience and relationship history with a vast number of OEM’s has served to increase the competitiveness and relevance of the portfolio and his passion for customer service is evident in the skills development he has undertaken with his team.

Tim has an honours degree in Marketing and is currently working on his Masters dissertation in the hope of completing this in 2020.

always do the right thing

we are thorough and diligent

we are proud and passionate about Absolute Aviation 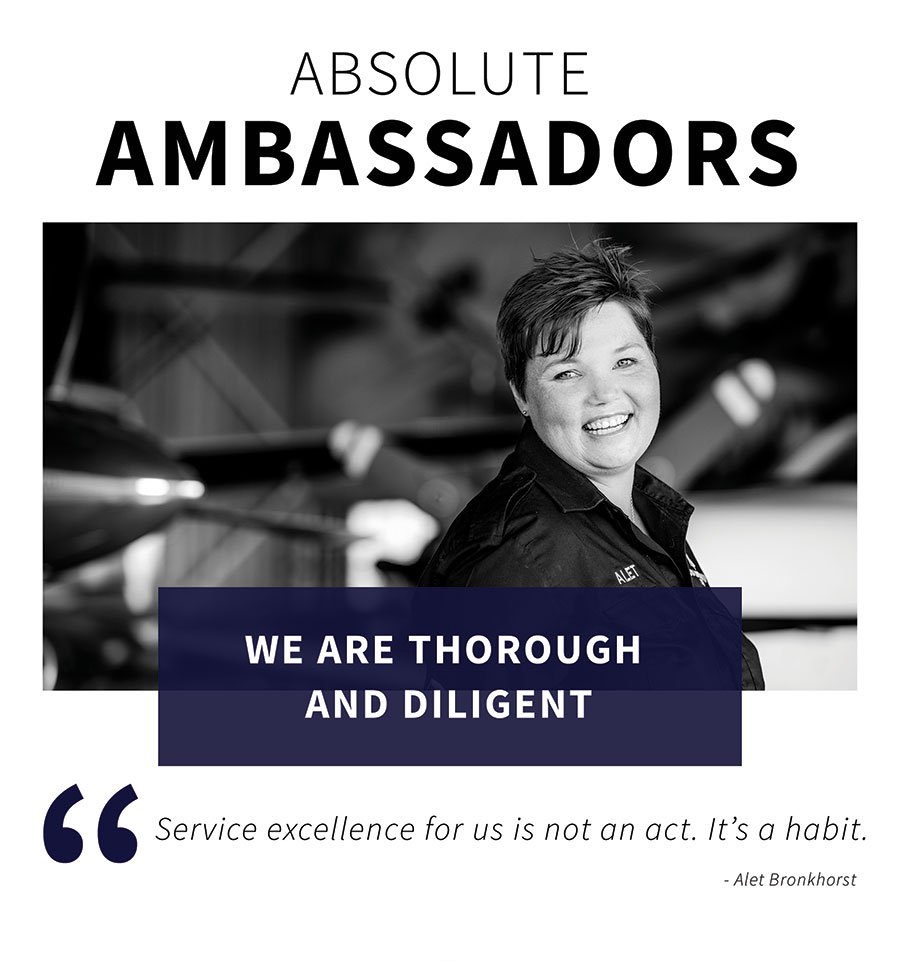 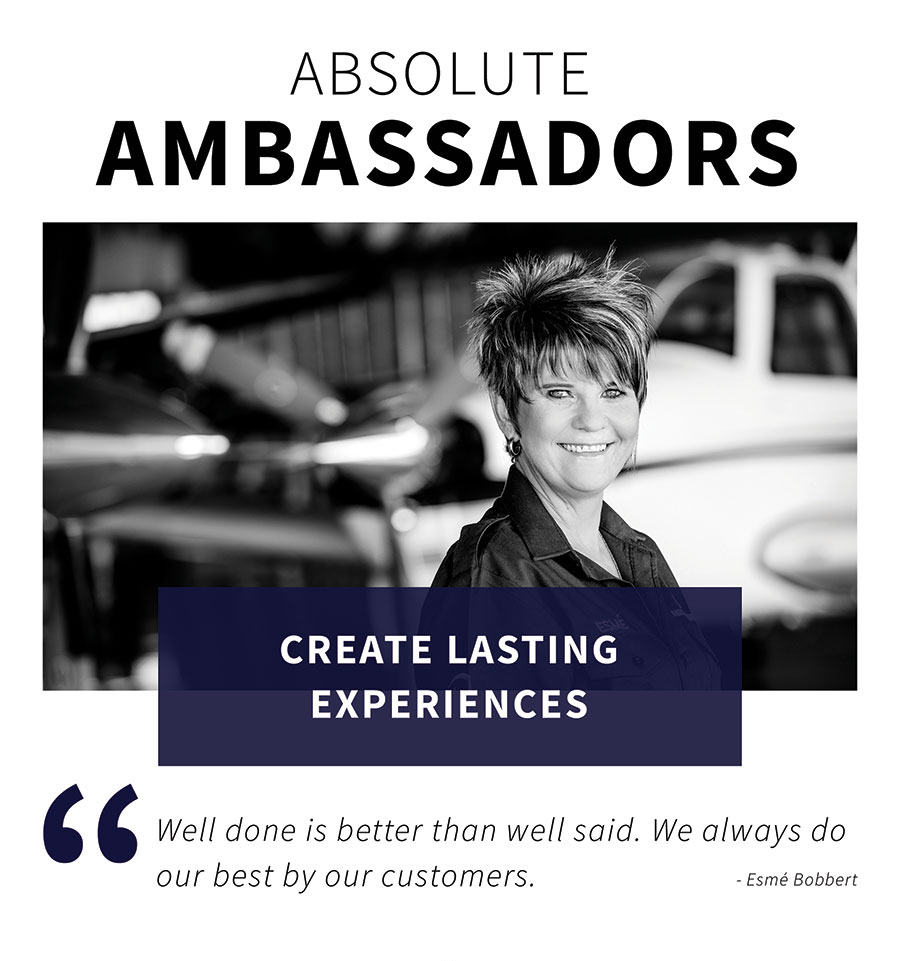 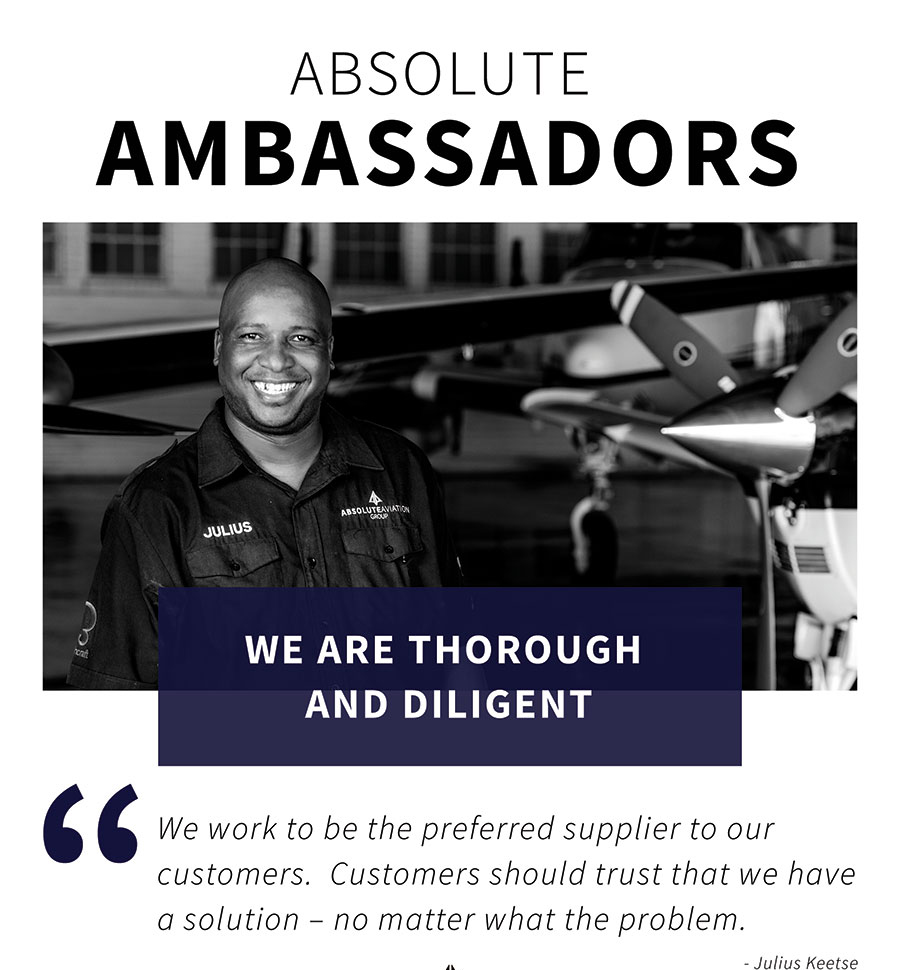 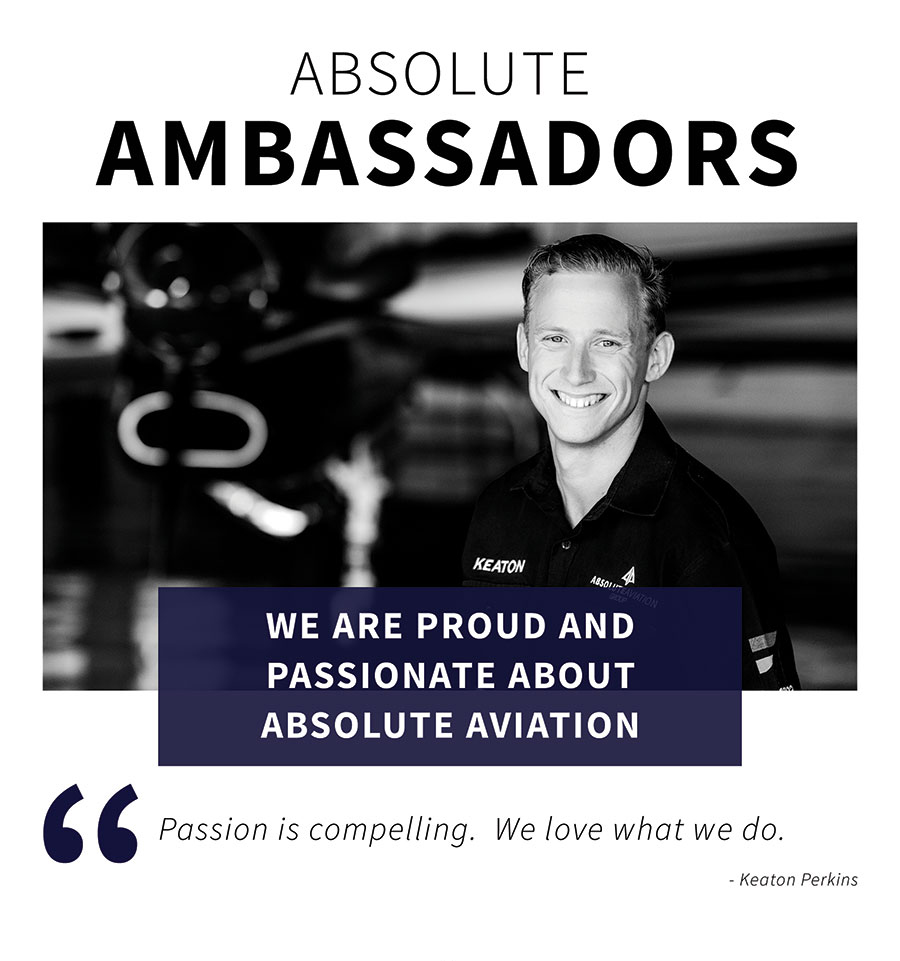 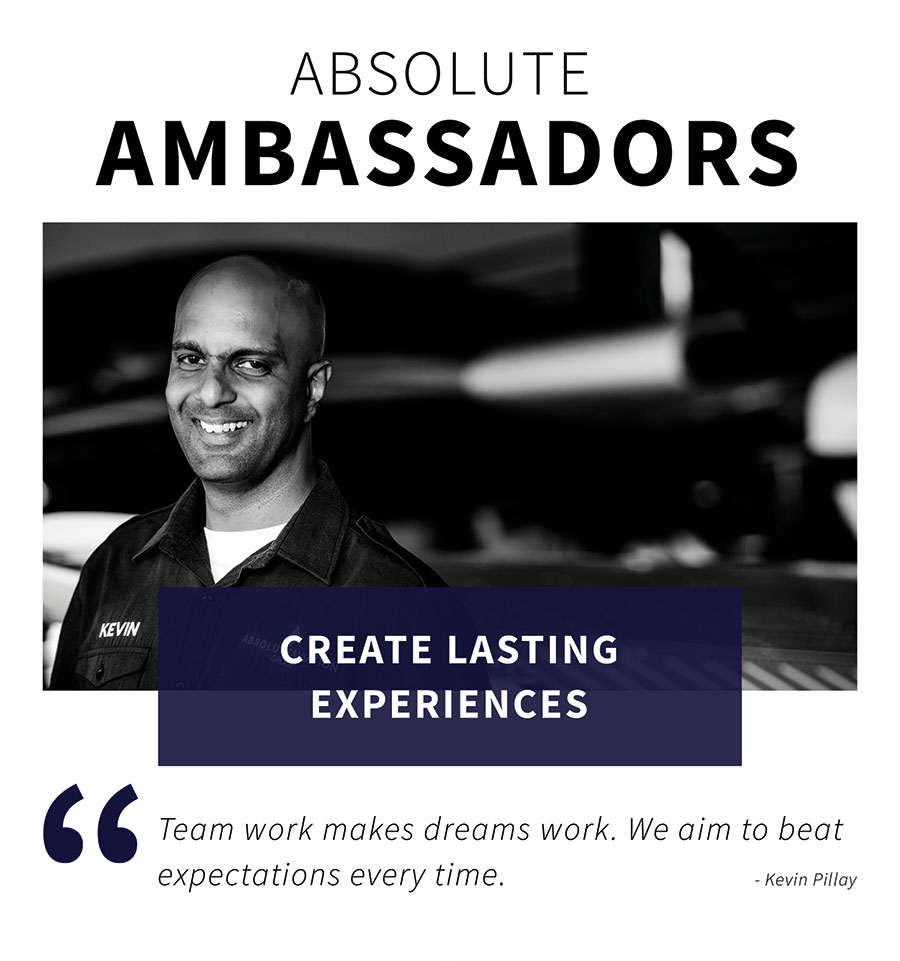 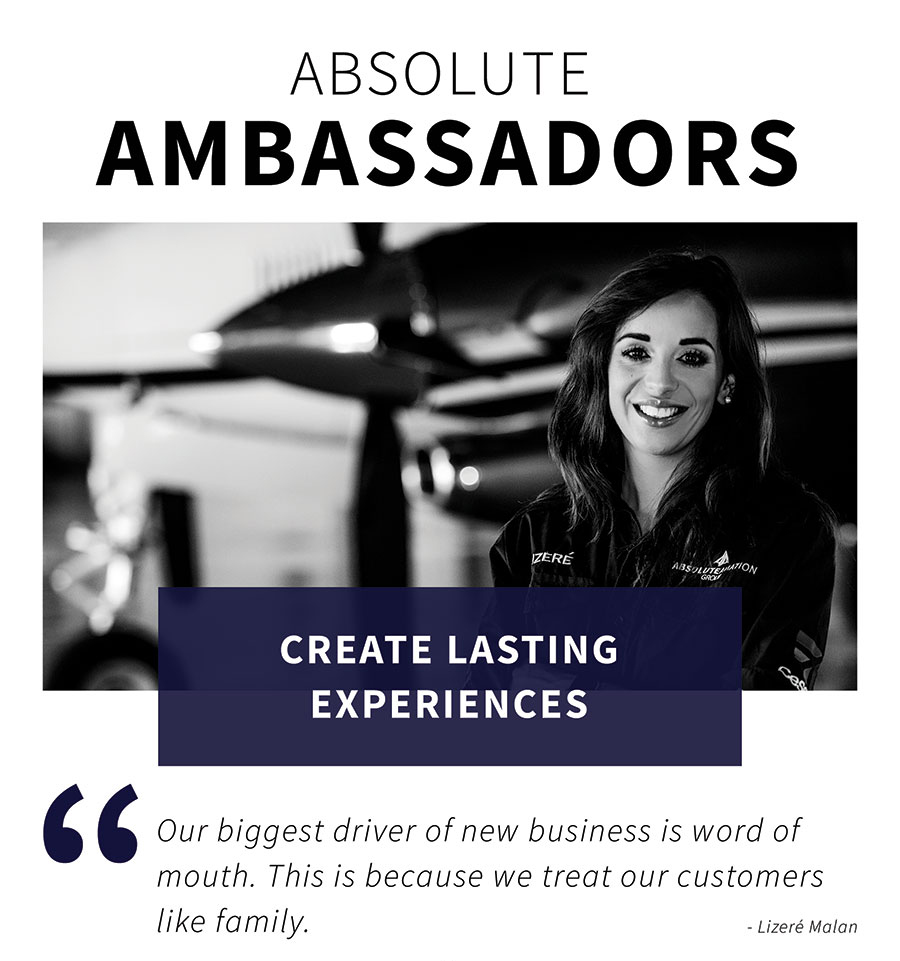 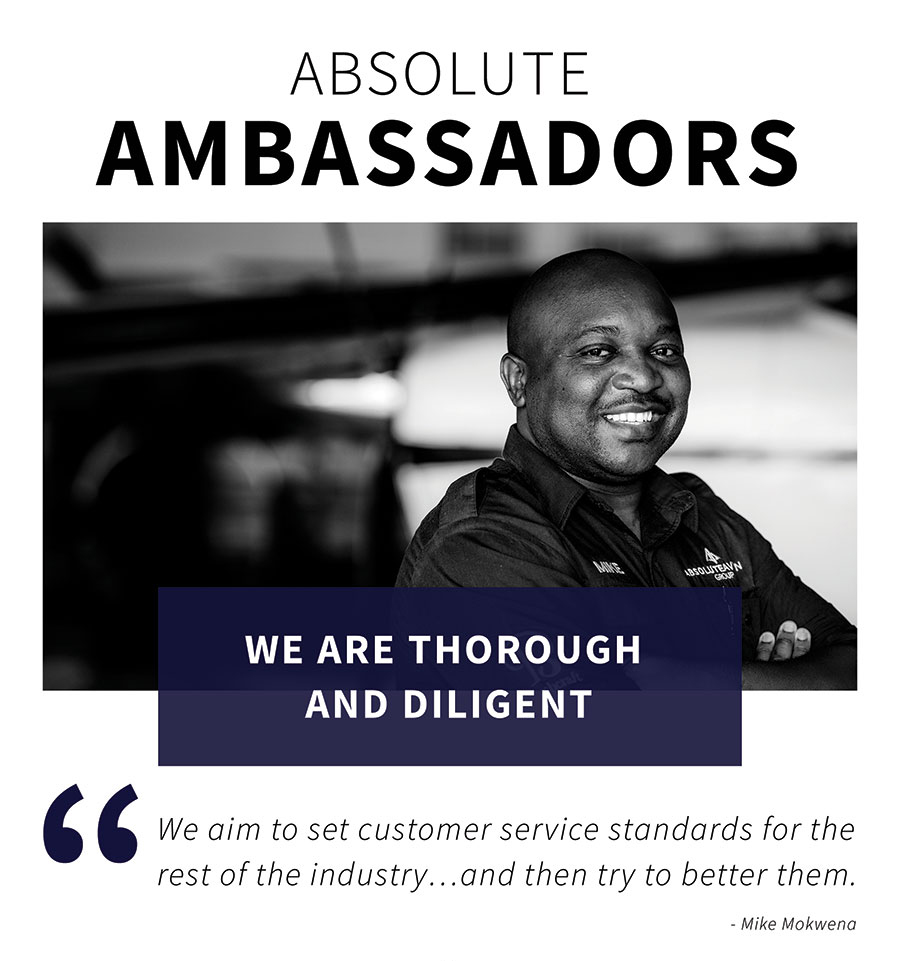 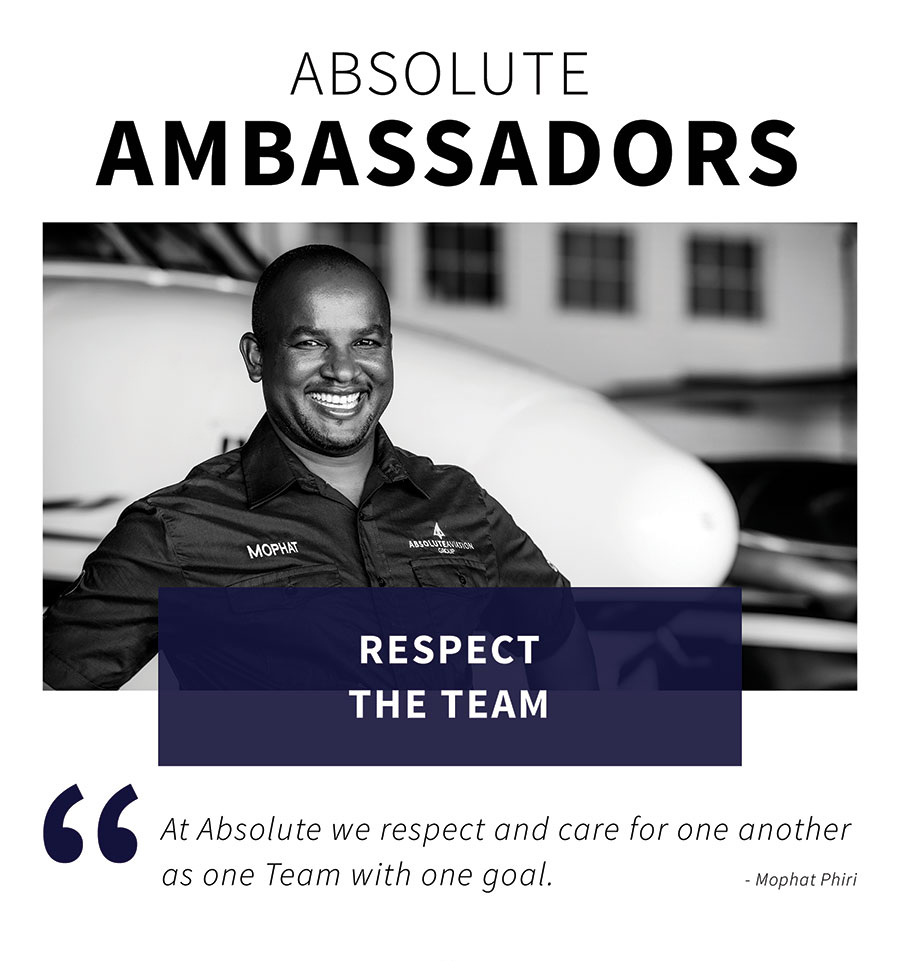 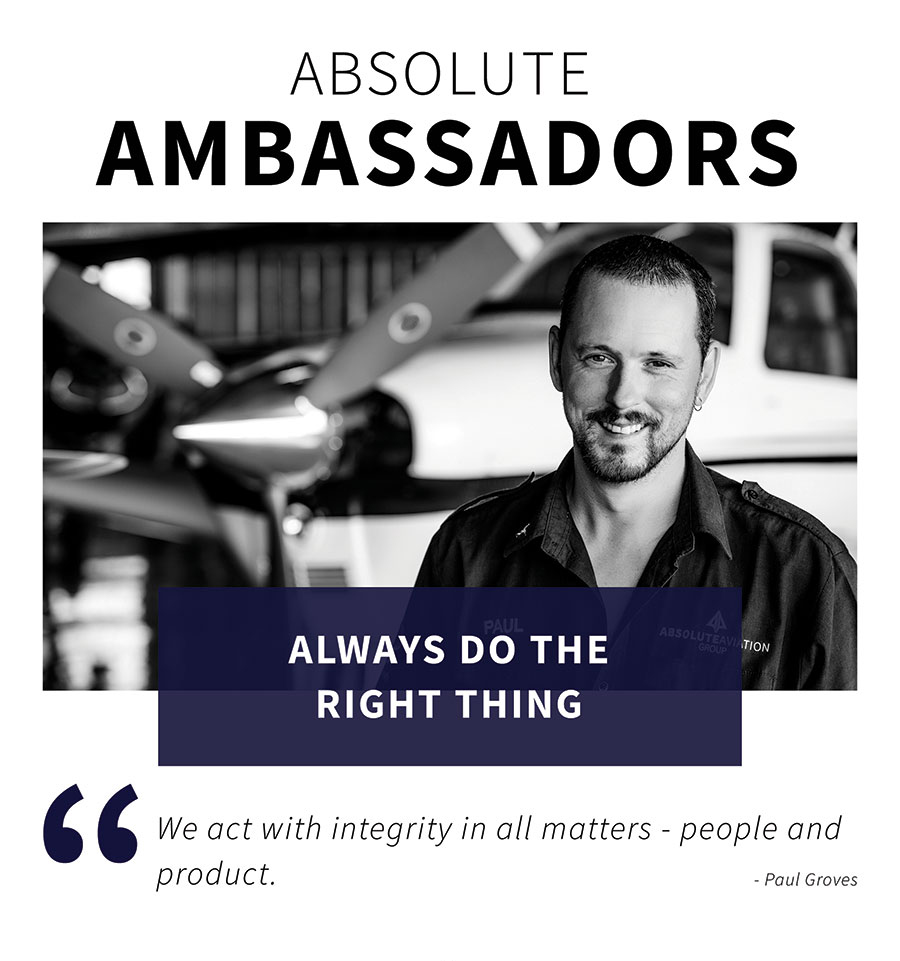 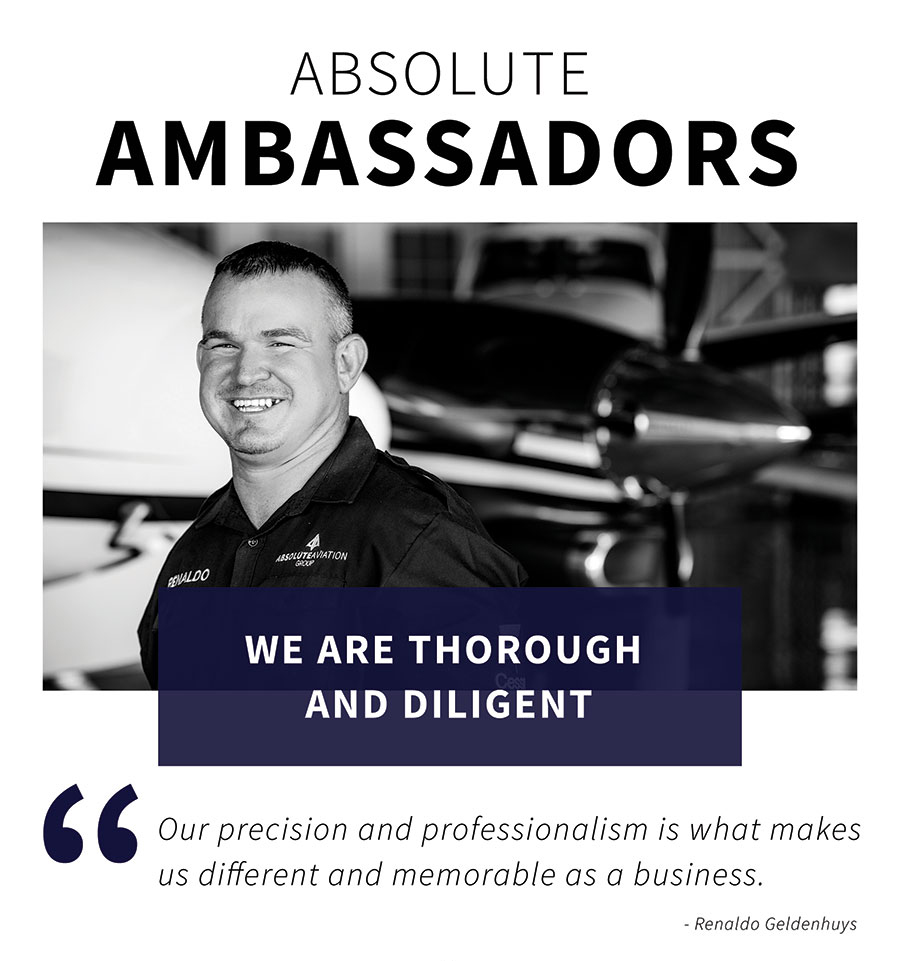 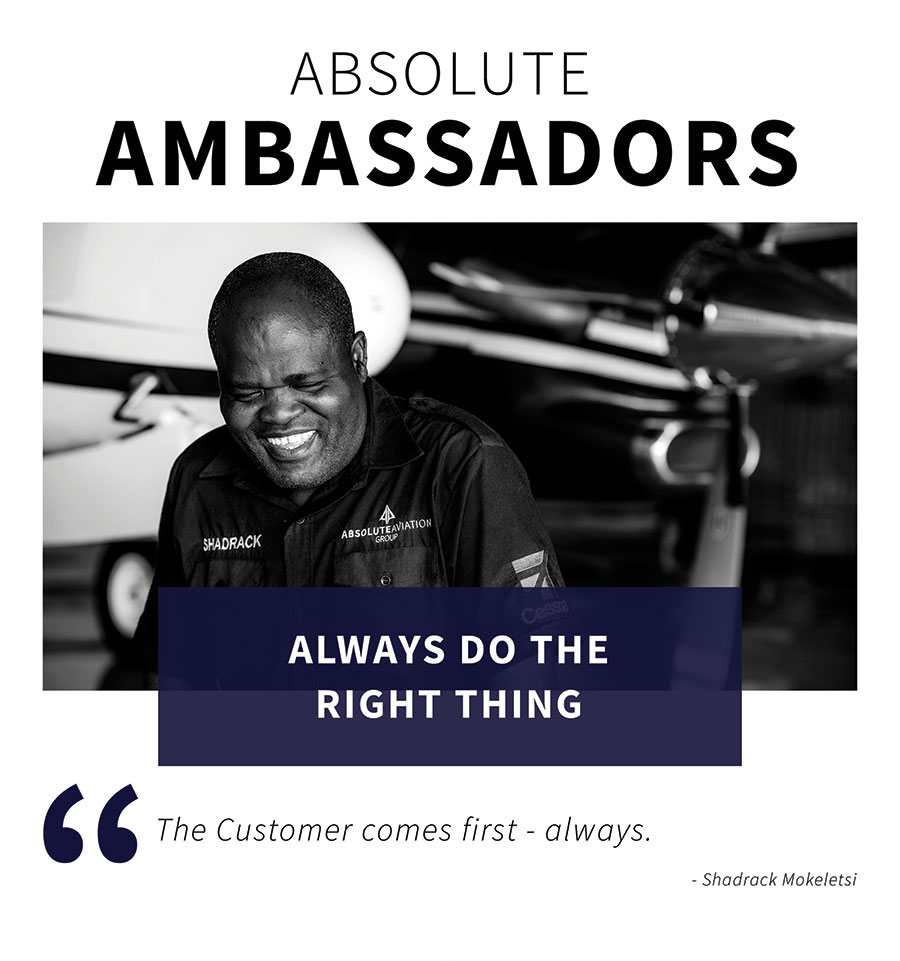 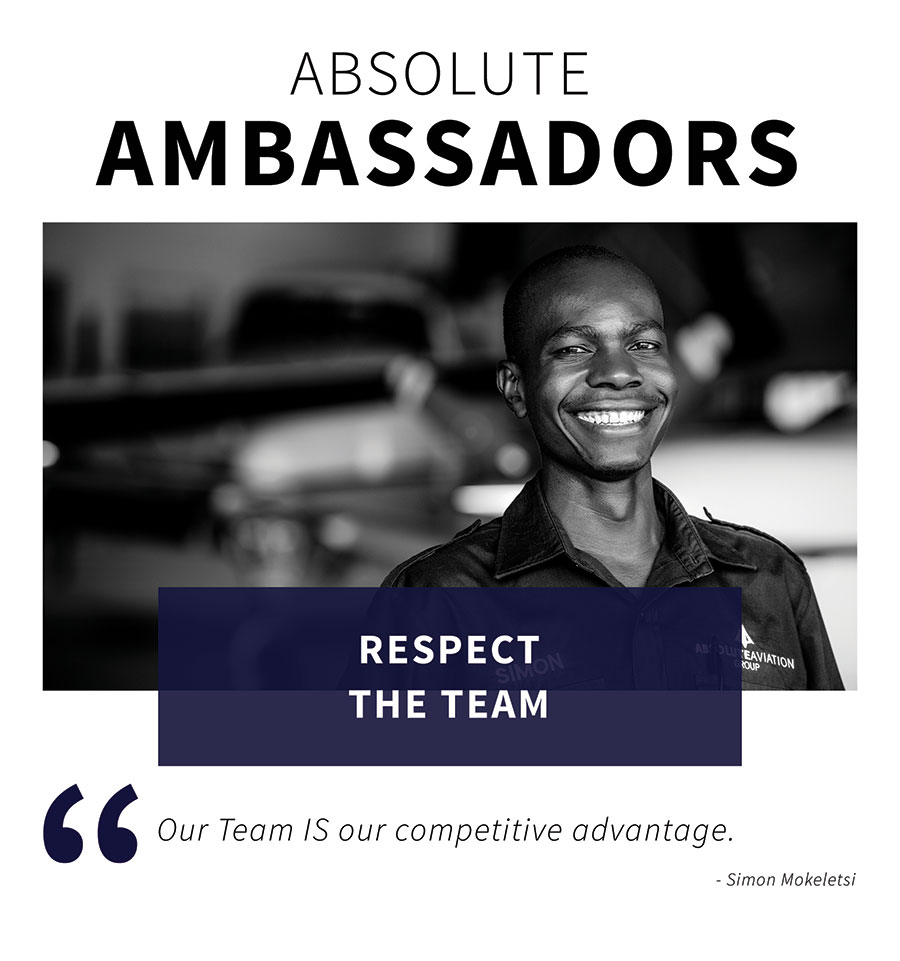 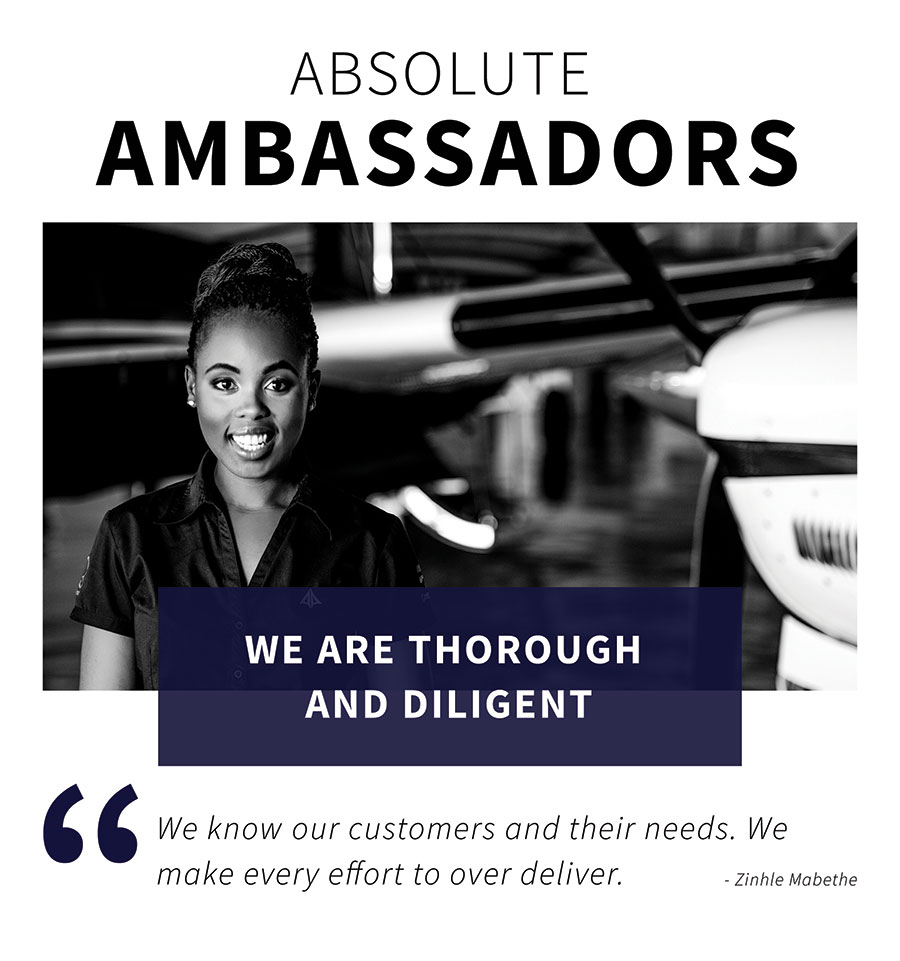